I heard a lot about Florianopolis. Some people told me it was a paradise with over 100 beaches, others advised not to bother going there. It’s one of those places, where Brazilians like to spend their holidays – a favourite summer destination of all, from Cariocas to Paulistas. I was not sure what to expect. Would it be like Costa del Sol in Spain?

One thing I learnt while travelling is, that it is good to listen to the opinions of others, but you never really know what a place is like, until you go there, and experience it for yourself. We decided to give Floripa a go, and we were proved, that this place was not overrated. 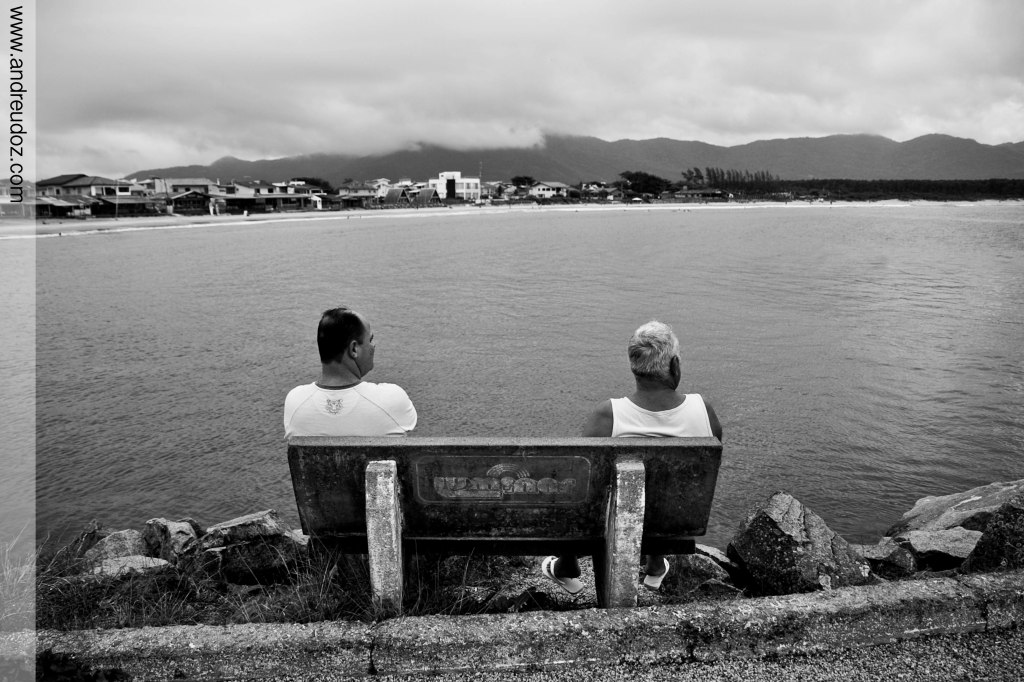 From the land, the bus brought us over a bridge, straight to the main city of the island – Florianopolis. It looked like a typical Brazilian metropolis with high buildings, motorways, banks and shopping molls. It even had its own university and an international airport.

The island turned out to be bigger than we expected. There were plenty of places to stay and visit, and a variety of landscape to admire. On top of that, within just  few kilometres, people lived completely different lives, from simple fishermen to great mansion owners.

At first, we weren’t exactly sure, in which neighbourhood we preffered to stay, but a chubby, heavy-metal-loving tourist assistant clarified, that we would have rather wanted to stay in the central part of the island, unless we wished to die of boredom. Since we really didn’t know any better at the time, we decided to take his advice. Even though he had a totally different perception of “boring”,  it turned out, that his advice was not bad at all. With Floripa’s public transport organisation, it would have been a living hell, to travel around the island, if we had stayed in the north or south. For some reason, public buses didn’t connect one side of the island with the other. They would only go to terminals of neighbouring districts. To get from the south to the north, one needed to change five or six times!

Our camping was located right next to Lagoa da Conceição. It wasn’t a dream spot, because there was a busy road right behind the fence, but what we discovered later, compensated the inconvenience. We were staying right next to an extensive sand dune. One of the first things we did, was to climb the sandy mountain, to see where it led. What we found on top of it was unimaginable.  All we could see around was clean, fine sand forming smaller and larger hills. 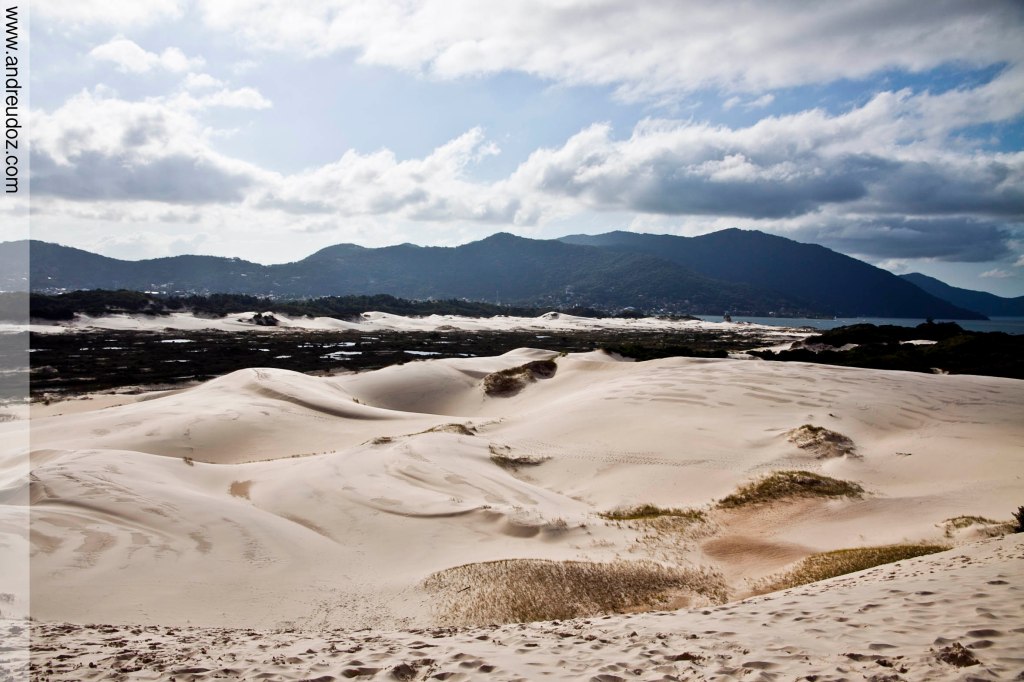 We started climbing them, jumping and playing with the sand. It felt great; we could not get enough of it. According to the map, the dune led to one of Floripa’s most popular surf beaches Praia da Joaquina. We decided to look for them, but we did not realise what a long walk we were signing up for. After 40 minutes of jumping and playing, we got hot and tired. All we could see around was sand.  At that moment, I thought, that this was what walking through a desert must feel like.

Finally, we saw something on the horizon. It was an enormous sand mountain, and it looked as if hundreds of ants were climbing it. When we got closer, we realised, that these were people sliding down with sandboards and slides. We wanted to get closer, but there was a chain of bushes, and deep paddles separating us from it. It turned out to be a real quest to get through. It required backtracking, jumping, and cutting through the sharp, tall grass. Once we crossed it, we were reworded with an unforgettable view. From the top of the sand mountain, we could see an incredible landscape: the dunes, and Lagoa da Conceição on one end, and a long beach of Joagiona on the other. 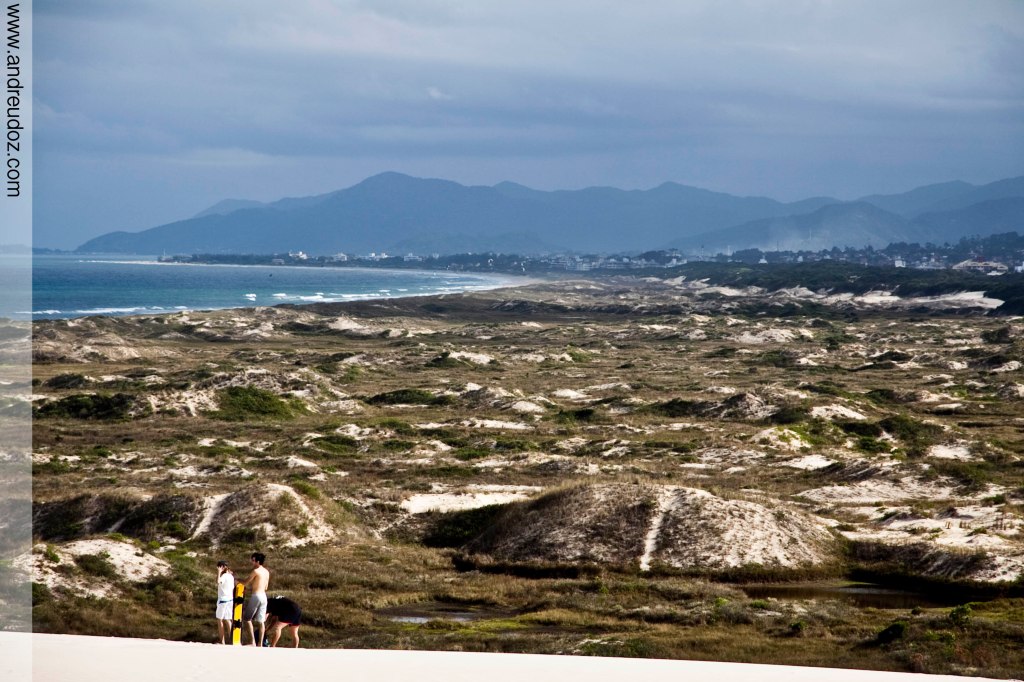 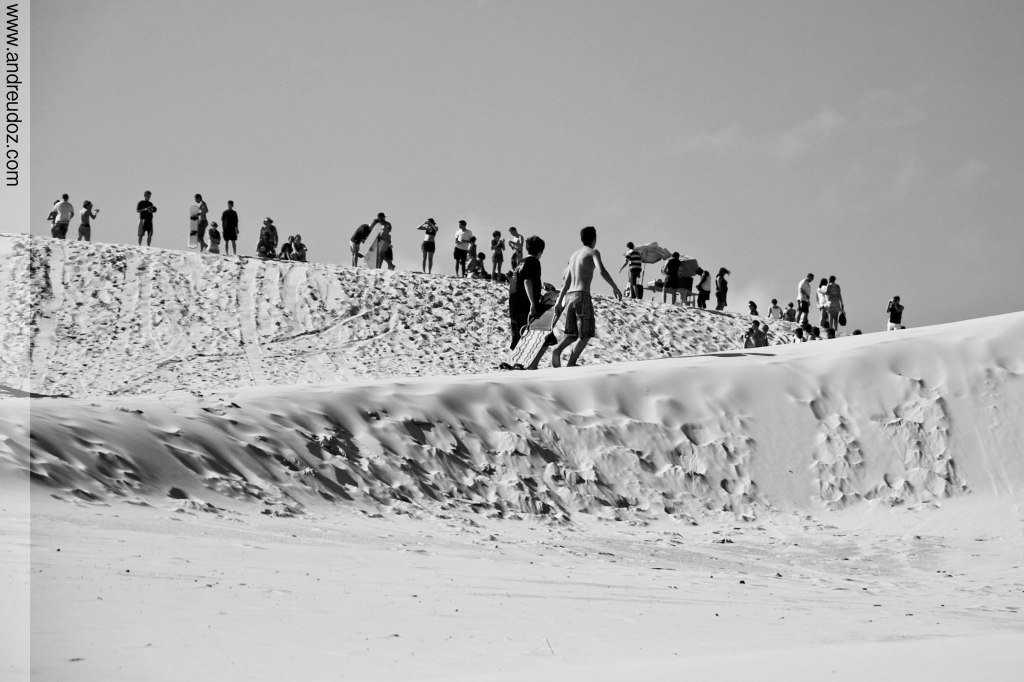 In the north of the island, there is a neighbourhood called Jurerê, which the islanders proudly call Miami of Brazil. We went to see it, with a lot of expectations. We did see some really expensive houses and 5 stars resorts, but the truth is: it’s a very long way from there to Miami!  It’s beaches are known and appreciated for its calm, worm waters. We did not have much luck to enjoy the bath, though. For some reason, the four kilometers long beach was literally covered with dead fish, some fresher than the others, some already half eaten by birds, some eyeless… It looked like some kind of a futuristic battlefield, and smelled like it too.

On the southern part of the island, we found a totally different environment and lifestyle. It was less touristy, and much more authentic. People live in small communities, supporting themselves mainly by fishing. Someone told us about a unique trekking spot in a village called Pantano do Sul. For an hour, we climbed a forested hill, to finally reach a beautiful deserted beach.

There was a lake, which joined with the sea when the tide was up, creating a very unusual landscape. Surfers and hippies came all the way there to build their camps in a little forest behind the sand dunes, and for a few days, disconnected from the outside world, to fish, or simply enjoy the surf and the nature.

It took us almost a week of exploration, before we discovered our favourite place on the island. One day we decided to follow a road by the Lagoa da Conceiçã . It led through a high hill with most amazing views, and pass some of the island’s most popular surf beaches Mole and Galheta.

We walked, untill we reached a place, where a river joins with the lagoa. Barra da Lagoa was an authentic fisherman village. Everything seemed to be about fishing there. There were boats, and bikes, and cars adjusted to transport fish. There were men fishing, cleaning fish, selling fish, and preparing their fishing nets everywhere you look. It felt great to sit there, and just watch everyone calmly following their daily routine.

We spent quite a while sitting by the little port and just stearing at people. It was a warm sunny day, so we finally decided to move on, and look for a beach.  And there, we found something we did not expect at all. This storry, however, desserves its own space and will be written soon! 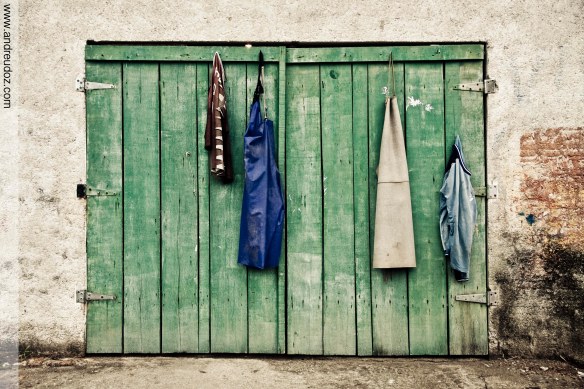